Site security remains one of the largest concerns of online shoppers, even though more people than ever before are engaging in the practice. Trust badges have long proven effective at assuaging the concerns of most folks, though some do a much better job at it than others. Ultimately, the most respected e-commerce trust badges come from a variety of sources and have different connotations as a result.

That green lock in a browser’s URL window says the site is verified secured by SSL (although it’s now actually known as Transport Layer Security or TLS). The protocol governs the establishing of encrypted links between a web server and a browser. In other words, SSL technology ensures all data transmitted between your web server and your customer’s browser remains encrypted. Though not technically a badge per se, savvy customers look for the green lock to be certain data transmissions are safe.

While there exist a plethora of security seals to plant on your checkout pages, the most trusted ones are Norton and McAfee. Research conducted by the Baymard Institute, an independent web usability research organization, found 35.6 percent of survey respondents consider Norton the best, while McAfee Secure followed closely on its heels with 22.9 percent of respondents expressing a preference for it. Baymard’s researchers noted both companies are primarily known for their anti-virus software. Because of this, they surmised people probably recognize these brands better, associate them with security, and therefore trust their site seals (which include the company logos) more.

Coming in third and fourth in the Baymard survey were trust seals from TRUSTe and the Better Business Bureau (BBB). Remarkably, SSL certificates, along with the Norton and McAfee badges represent actual tech protecting the user. Meanwhile, trust seals don’t indicate any technical security at all. Instead, they are certification of the company posting them and/or its consumer relations.

So, while a Better Business Bureau accredited badge won’t guard your customers against theft of their personally identifiable data, it does say you conduct business dealings in an above the board manner and treat your customers well. In other words, those badges say your customers have little to fear from you, as opposed to outside forces looking to profit from their pain.

So What’s Most Effective?

The answer to that question, like so many others in life is it depends. First of all, if you’re accepting credit cards, you don’t have any choice about SSL. The PCI DSS (Payment Card Industry Data Security Standard) insists upon SSL for any site accepting major credit cards.

Beyond that, it’s a function of what you’re trying to accomplish. The Norton SSL seal says your site maintains an encrypted connection. The McAfee seal says you’re running a clean, non-infected “hacker safe” site. Meanwhile, the BBB Accredited and TRUSTe seals tell your shoppers they can trust your consumer relations.

If you’re selling products online, even if you’re using one of the many free e-commerce website templates running these badges will improve your conversion rates considerably. As consumers have become more aware of the meanings of the most respected trust badges, they’ve become vigilant about looking for them when they’re asked to submit financial information. Sites that have them make a lot more money than sites that don’t. With that said, let’s set aside the virtue of doing the right thing for a moment. The fact that higher converting sites run these trust badges is a very compelling reason to do what you need to do to add them to your eCommerce site too.

Forgot Windows password on your laptop or desktop computer? Password was entered wrong many times and then the Admin account got locked? If you’re looking for several hacks to help… 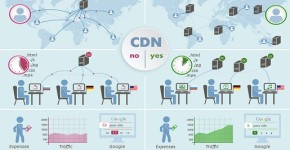 When we use the term CDN, we are referring to a content delivery network. As the name implies, a CDN is a group of servers that are geographically distributed to…